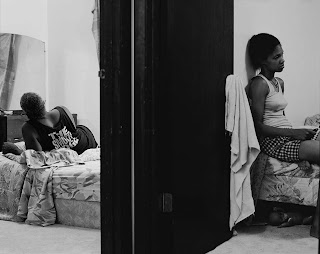 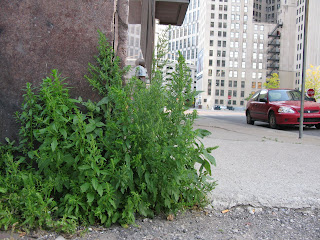 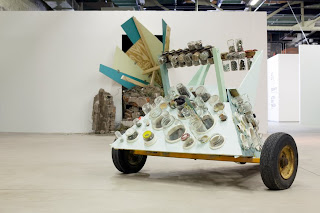 The trio of solo shows, curated by MOCAD Director and Chief Curator Luis Croquer and closing next week, represent key themes of contemporary art, specifically identity, environment, and what has been termed interventionism. While the work of each artist is distinctive, they make sense when viewed together, especially in the context of Detroit in its post-postmodern manifestation.
Latoya Ruby Frazier mines a creative lode that has become quite familiar in the reverberations of second-wave feminism's declaration that the personal is political, which artists exploring questions of class, ethnicity, and gender have extended into the realm of aesthetics since the 1970s. Frazier hits all three in a series of black-and-white photographs and color digital videos. As with a lot of work in this vein, Frazier is at pains to examine her origins, particularly in her case in two generations of direct maternal forebears. Those images are affecting, but more interesting are the ones that short-circuit the expected. These include the photographs, such as Me and Mom's Boyfriend Mr. Art (2005, top above), that foreground the absence of the father who would provide the other half of identity's equation. (As Gilles Deleuze and Felix Guattari put it in Anti-Oedipus the holy trinity of Western patriarchal order: "Daddy, Mommy, Me.") The other significant image in this regard is Huxtables, Mom, and Me (2008), which shows the artist wearing a t-shirt of the TV family whose "buppy" perfection papered over rising economic inequality, especially for African Americans, in the Reagan Era, the decade in which the artist was born.
The Belgian artist Jef Geys presents a project based on Detroit that to the casual observer might seem more apropos of a natural history museum. Woodward Avenue (2010) maps the collecting of botanical specimens along the city's central thoroughfare from near its base in Cadillac Square in downtown Detroit to its termination 30 miles to the north in Pontiac. The project is documented in framed Google maps and photographs of each collection site (middle, above) as well as in examples of the dried plants and their scientific descriptions. Woodward Avenue continues an earlier project done in Bolivia involving indigenous populations and their use of medicinal herbs. In Detroit, the encroachments of plant life into paved areas are considered weeds, yet some turn out to be edible or medicinal instead of being noxious. The installation includes films from the Bolivian project that connect the two sites in terms of parallel local knowledge of fauna but also sustainability when seen in light of Detroit Summer and other urban agriculture projects. (Also, identifying natural stores of indigenous medicinal plants could come in handy when the American healthcare system finally totally collapses.)
Detroit's own Design 99 (artist Mitch Cope and architect Gina Reichert) are represented by elements of their ongoing community-engagement work, which at MOCAD is titled Too Much of a Good Thing. The central element is The Neighborhood Machine (2010), a Bobcat tractor painted in horizontal color stripes to match their Power House community-reclamation/art object on Detroit's East Side. In true urban pioneer fashion, Design 99 uses bricolage techniques to capitalize on resources at hand. The castoff is a time-honored element of Detroit art, but in this case it isn't incorporated into works meant for purely aesthetic contemplation. Instead, it functions in a more matter-of-fact way in retrieved use value: found glass jars that are used to hold hardware, scrap wood painted and formed into Razzle Dazzle sculptures (bottom, above) intended to discourage vandalism, and found shopping cart pieces formed into a container for garden tools.
What holds all of this work together for me is the sense of a vision of the post-Apocalyptic landscape of America in decline, the void in the shredded social fabric of the ruined welfare-capitalist state, the final death throes of modernity of which Detroit stands -- as it has for at least the last three-and-a-half decades -- as Ground Zero. In this wreckage, we're all cast adrift, making do as best we can. Each of these artists proposes individual ways of doing that.
Photographs courtesy of MOCAD. Photo credits: Latoya Ruby Frazier: courtesy of Higher Pictures; Jef Geys: courtesy of the artist; Design 99: courtesy of the artists, photo by Corine Vermeulen.
Posted by Vince Carducci, editor & publisher at 9:57 PM

Vince Carducci, publisher
Royal Oak, MI, United States
Vince Carducci has written for many publications over the last two-and-a-half decades, ranging from alternative weeklies and webzines to academic journals, anthologies, and encyclopedias. He is Dean of Undergraduate Studies at College for Creative Studies, which according to design guru Steven Heller is "one of the vanguard art, craft and design schools in the nation, in the surprisingly beautiful city of Detroit." Follow him on Twitter @cultrindustreez.